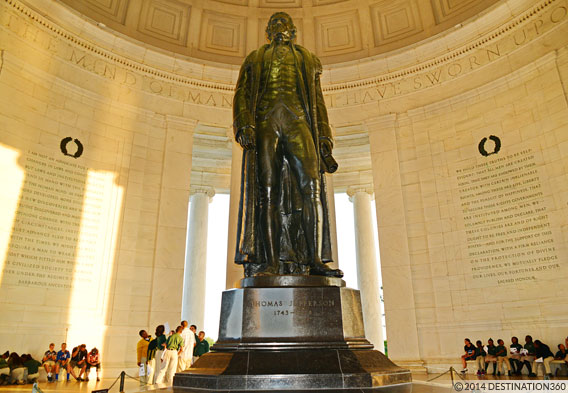 Well, looks like we’re back here again. Thomas Jefferson, one of the more controversial Founding Fathers, has once more found himself (well at least his statue) in another battle. This time students are calling to remove his likeness from the University of Missouri. A conservative female student who attends there was called an Uncle Tom on Twitter because she dared to support Thomas Jefferson.

It all starts because the statue of Thomas Jefferson is a point of contention. Many see it as an affront to blacks and celebrating slavery. There is a Change.org petition calling for the removal of his statue (it has only received 90 signs, not the necessary 100 it was needed to take to the school administration). Jasmine Wells, a member of the College Republicans, did a Stand With Jefferson rally, which got the ire of these Twitter haters because she is black. The College Republicans also started a petition in support of Jefferson’s statue and got at least 146 signups.

There were several other Twitter users who weren’t happy with the rally.

#StandWithJefferson because white people would rather celebrate a predatory slave owner than admit that #BlackLivesMatter.

Wells is in the right. And how is this privilege being unchecked? Because a statue of one of the Founding Fathers is on campus? Thomas Jefferson was one of the first to push for education. He wrote to James Madison in 1787,”Educate and inform the whole mass of the people. Enable them to see that it is their interest to preserve peace and order, and they will preserve them. And it requires no very high degree of education to convince them of this. They are the only sure reliance for the preservation of our liberty.”

History has shown us that great leaders have faults. Thomas Jefferson was his battle with slavery. On the one hand, he was a slave owner. There is no denying that. He allegedly fathered children with one; a woman by the name of Sally Hemming. He has a complicated relationship with slavery, that no one is denying.

However he authored the Declaration of Independence, where he stated famously that “We hold these truths to be self-evident, that all men are created equal, that they are endowed by their Creator with certain unalienable Rights, that among these are Life, Liberty and the pursuit of Happiness.” His Ordinance of 1784 were the main principles in the Northwest Ordinance of 1787 which barred slavery from the Northwest territories. The Northwest Ordinance was used as a basis for the 13th Amendment, which ended slavery after the U.S Civil War.

He was morally against it and called it a moral depravity. He was the one who ended the slave trade in 1807 when he was President.

In the end, Thomas Jefferson was a Founding Father, his views heavily influenced the Constitution and he helped make this country great. Calling for the removal of his statue isn’t removing racism, it’s removing history. It’s removing the statue of a man who has done great things for this country. Removing statues that may hurt someone’s feelings because of what they did two hundred years ago is idiotic and straight out of 1984. Calling for the removal is censoring history. It is up to the people to educate themselves, not to remove the statue because it might infringe on their ability not to be offended.

Thomas Jefferson would have defended the people calling for the removal of his statue however, because he believed in freedom of speech. He said in his First Inaugural Address on March 4th, 1801:

“Error of opinion may be tolerated where reason is left free to combat it.”