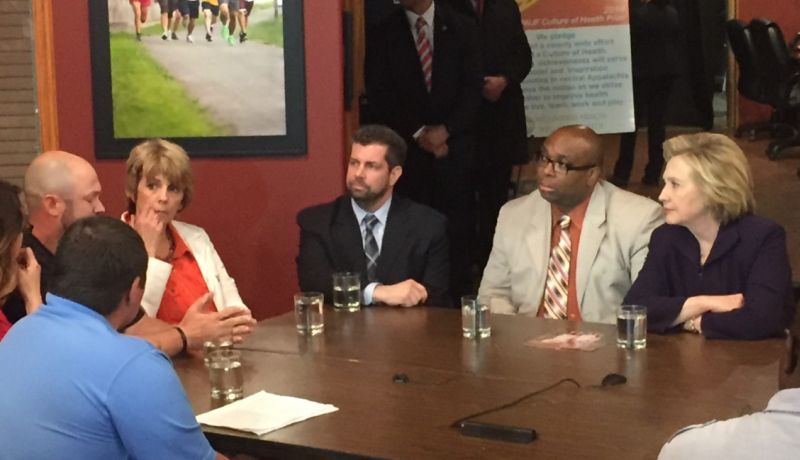 Presidential candidate Hillary Clinton apologized Monday for saying in March that she would put coal mines “out of business” after being confronted by a former West Virginia coal miner.

The former secretary of state called the comments a “misstatement” during her coal country campaign ahead of Kentucky’s May 17 Democratic primary election. Clinton is making stops in West Virginia, Kentucky, and Ohio to pitch her plan for making coal states green energy states.

“What I said was totally out of context from what I meant,” Clinton said at a group discussion, as angry protesters and former coal miners gathered outside. “It was a misstatement, because what I was saying is that the way things are going now, we will continue to lose jobs.”

Clinton argued in March that she had a plan to put laid off coal miners back to work by turning coal-dependent states into renewable energy-dependent ones.

“I’m the only candidate which has a policy about how to bring economic opportunity using clean renewable energy as the key into coal country. Because we’re going to put a lot of coal miners and coal companies out of business,” she said during a CNN forum.

Clinton added: “And we’re going to make it clear that we don’t want to forget those people. Those people labored in those mines for generations, losing their health, often losing their lives to turn on our lights and power our factories.”

Clinton’s apology came only after a former West Virginia coal worker confronted her over her March comments.

“I just want to know how you can say you’re going to put a lot of coal miners out of, out of jobs, and then come in here and tell us how you’re going to be our friend, because those people out there don’t see you as a friend,” Bo Copley, a 39-year-old father who lost his job in the coal industry, told Clinton.

She personally apologized to Copley, but told the former coal worker that her statements were taken out of context.

Still, she went on to tell reporters on Monday that she feels bad that her comments were not taken as she intended.

“I do feel a little bit sad and sorry that I gave folks the reason, or the excuse, to be so upset with me, because that is not what I intended at all,” Clinton said, CBS News reported. “I’m here because I want you to know whether people vote for me or not, whether they yell at me or not, is not going to affect what I’m gonna try to do to help.”