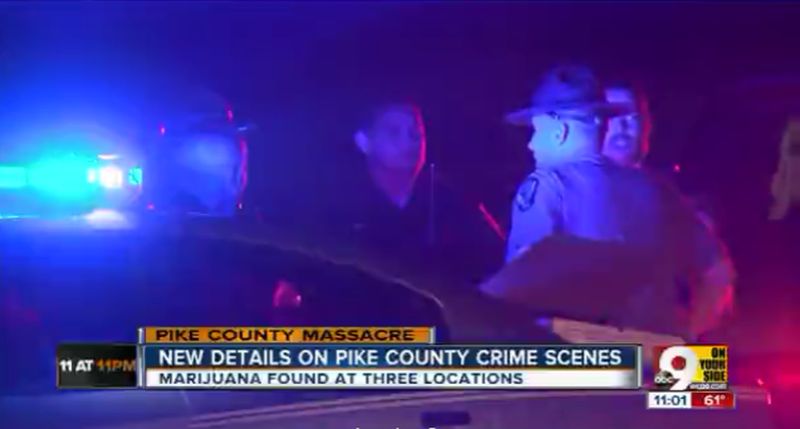 Cartels may have been behind the shocking massacre of eight members of an Ohio family killed execution style Friday.

Eight members of the Rhoden family were murdered “execution style” according to WCPO Scripps 9. The slaying took place in rural Pike County, Ohio, which is known for marijuana cultivation. Ohio Attorney General Mike DeWine told the press that it was “pre-planned.”

At “three of the four locations where eight members of the Rhoden family were found shot to death,” authorities found marijuana being grown in an amount that is commercial in nature. DeWine stated in a radio interview Monday that the Rhoden family was growing pot “to sell.”

According to DeWine, while authorities do not currently believe the Rhoden family’s deaths were linked to their marijuana operations, he said “nothing is off the table.” The deceased members of the Rhoden family range in age from 16 to 44.

Pike County has developed an unsavory reputation with law enforcement for its commercial-size growth of marijuana. The Daily Beast reports that, “In 2010, the DEA seized 22,000 plants from Pike County and 25,180 plants from neighboring Muskingum. By comparison, the rest of Ohio combined saw 58,000 plants seized that same year.”

Pike County offers advantages to pot farmers, “the landscape is more attractive, better growing conditions,” according to Jill Del Greco of the Ohio A.G.’s Office, who spoke with The Daily Beast. Another advantage to Piketon is its convenient distance from large cities just a mere six hour drive away. Cities such as Cleveland, St. Louis, Chicago and Detroit can all be easily reached from the illicit agricultural center according to The Daily Beast.

Mexican cartels have had a foothold in Ohio drug trafficking for quite some time. Just in November 2015, cops arrested a leading member of El Chapo’s Sinaloa Cartel’s Ohio operations. Jose Francisco Morales-Medina was picked up in a raid of “three homes tied to” him, which resulted in, “finding $450,000 in cash, a shipment of heroin worth around $1 million, and several guns,” according to Business Insider.

Despite the sensationalist drug bust back in November 2015, Mexican cartel ties to Ohio run deep. The Columbus Dispatch reported in 2008 that the Sinaloa Cartel had operations throughout the state, even in some of its largest cities including Cleveland, Cincinnati, Columbus, Dayton, and Akron.

For Plummer, confronting cartels is, “something we’re not used to. We’re holding our own right now. But you don’t know when you upset the wrong kingpin,” he told ABC 22. The sheriff is fearful for the safety of his officers and he “pray[s] every night … Because we’re hearing they’re doing counter-surveillance on us. They’re following us home.”

ABC 22 went on to report the commentary of retired DEA agent Russ Neville who speculated as to why a cartel might do something as gruesome as massacring an entire family growing some pot. Neville hypothesized that, “These three grow operations, they were producing marijuana maybe for the cartel.”

Another theory Neville offered was “maybe this was off-setting the profit of the cartel by these individuals selling their own marijuana and they’re making a statement.” Republican presidential candidate and Ohio Governor John Kasich has called the massacre of the Rhoden family, “tragic beyond comprehension.” The killer or killers are still at large according to authorities.