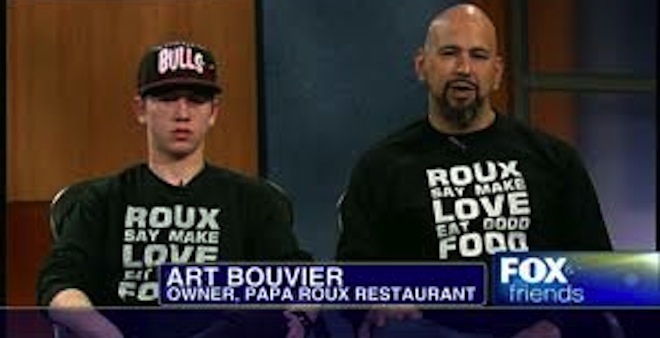 After the owner of an Indiana Cajun restaurant was robbed over the weekend, he came up with a simple solution: offer discounts at his eatery to customers who pack heat.

Art Bouvier announced on Facebook Saturday night that Papa Roux Po-Boys and Cajun Eats would offer 25 percent off to anyone toting a concealed carry license.

“But hell, if thugs are going to come in and threaten OUR extended family with guns, you’d better believe I will use every trick I know to protect them,” Bouvier posted on Facebook. “Protect our family, I mean. Not the thugs.”

No one was hurt in the robbery, but the robber claimed to have a gun. Other shops in the area have had problems with robberies, further pushing Bouvier to offer the discount.

“I don’t want Papa Roux to turn into the O.K. Corral,” Bouvier told The Indianapolis Star.“but I don’t want to be an easy target.”

Bouvier said he never intended for the offer to be a publicity stunt, but his discount has garnered national headlines and gained hundreds of Facebook friends. At the same time, he has drawn a lot of criticism.

“I’ve already been accused of stirring up controversy, being a media whore, and it’s even been implied that we staged the whole thing,” he wrote on his Facebook page. “I have no intelligent responses to these things. I don’t feed the trolls and neither should you.”

It was not immediately clear if Bouvier himself is a gun owner. The Daily Caller News Foundation reached out to his restaurant, but it is closed on Mondays.

America vs. The EPA: Fighting ‘A Massive Executive Power Grab’