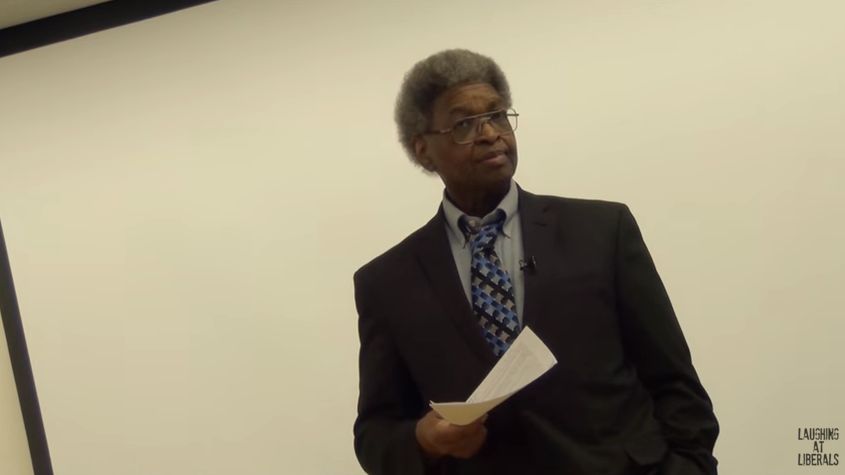 James Harrison, history professor at Portland Community College, said in a lecture Monday for the college’s April Whiteness History Month that peace in the U.S. is impossible so long as whiteness still exists.

In a talk entitled “Imagine A World Without Whiteness,” Harrison declared confidently conflict can only cease once the power structure of whiteness is totally eliminated.

“And how do we get to that good world is the question — a world without conflict. And to me, my interpretation of these words, is it would be a world, or U.S., without whiteness, in terms of the power structure,” Harrison said, offering his own interpretation of Lennon’s song.

For Harrison, the term whiteness is essentially a social category to which whites belong. And a social category, Harrison continued, is a group of people sharing in a common similar attributes, even if they have never actually met.

“So whiteness, white people, share a whole lot of things, even if they don’t interact, and one thing that they share is whiteness, or white privilege,” Harrison said.

Harrison then went on to explain that demolishing whiteness is a matter of a lot of individuals each taking small steps to achieving the objective.

“Can there be a world without whiteness, a world in which white privilege doesn’t exist?” Harrison asked his audience.

“My answer is yes, we can, because it’s happened before, and it all revolves around individuals taking small steps to dismantle and demolish the whole concept.”

The effort is working. Harrison said whiteness is on the retreat, noting estimates indicate whites will no longer be a majority in the United States by 2040 or 2050.

Portland Community College’s Whiteness History Month page tries to distinguish between “white” and “whiteness,” by saying the latter refers to a system of advantages afforded to white, rather than European-descended people with white skin.