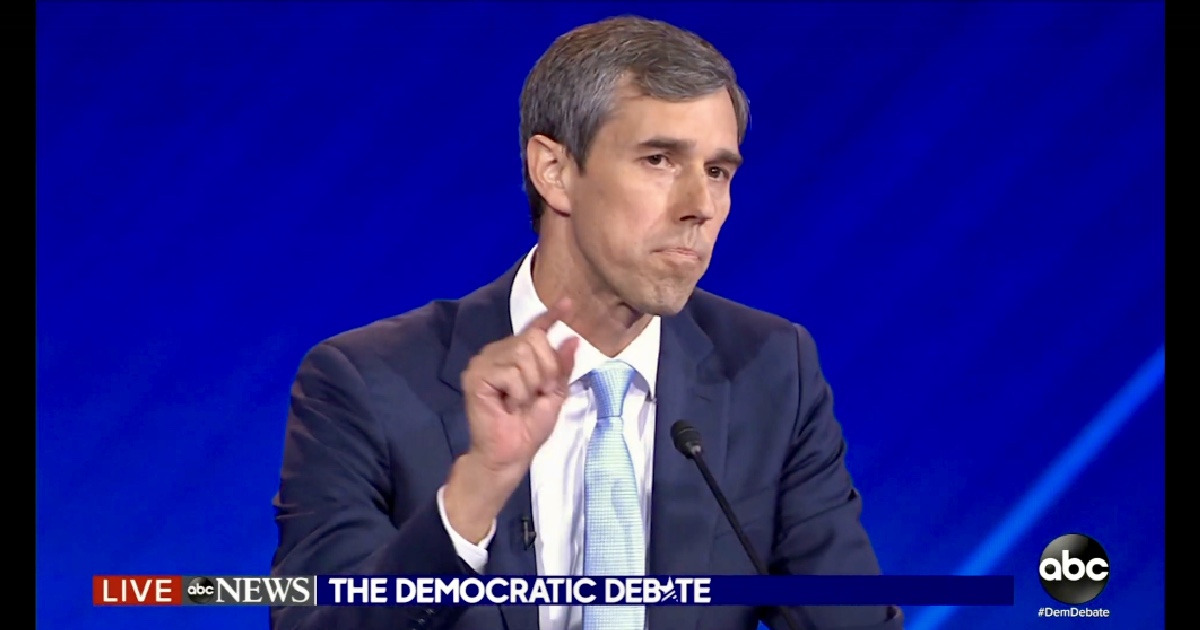 In a rare anti-liberty double whammy last night, Beto O’Rourke decided to go after not only the Second Amendment, but also the First Amendment.

After saying, “hell yes” to the proposition of mass gun confiscation, he decided to double down and go after free speech on Twitter after the debate.

First off, it is impossible to not notice the manner in which Beto has flipped on the issue of guns in the last year. Just a year ago, while running for Senate against Ted Cruz, he made his sentiments perfectly clear on a radio show. When asked about potential confiscation of so-called “assault rifles” he said, “To be clear they should have [AR-15s], if you purchased that AR-15, if you own it, keep it, continue to use it responsibly.”

Now, a year later, he wants to take your guns, and which guns he takes are completely up to him. On stage, he started naming random rifles that he would ban in America.

While most of the others on stage followed along and encouraged O’Rourke’s audacity, Joe Biden chided them , saying “that’s just not constitutional.”

But O’Rourke’s anti-constitution ire was not reserved solely for the Second Amendment last night – he decided to go after the First for good measure.

In a testy Twitter exchange, he began by tweeting out his earlier phrase from on stage “hell yeah, we’re gonna take your AR-15.”

Briscoe Cain, a Republican member of the Texas House of Representatives, responded with “My AR is ready for you Robert Francis.” Beto then responded with self-righteous indignation, saying “This is a death threat, Representative. Clearly, you shouldn’t own an AR-15—and neither should anyone else”, implying that Cain’s rights should be stripped from him as a punishment for something he said on Twitter.

This is a death threat, Representative. Clearly, you shouldn't own an AR-15—and neither should anyone else. pic.twitter.com/jsiZmwjMDs

According to Ken White, a California attorney and First Amendment expert who writes for the popular free speech blog popehat.com, this comment by Cain, while politically ill-advised, did not constitute what the Supreme Court defined as a “true threat” of violence.

The true threat doctrine was established in the landmark case Watts v United States (1969) and clearly lays out what is and isn’t constitutionally protected speech with regards to threatening language.

According to White, “Briscoe’s little gun flounce is not a true threat for several reasons. First, it’s rhetorical political hyperbole on Twitter. Second, it’s conditional and about a hypothetical future—he will use his gun if Beto comes to get it. Based on those” he continued, “a reasonable person familiar with the context would not interpret it as a statement of sincere intent to attack Beto with an AR-15. Nor is it likely he intended it as other than blustery defiance.”

“Not a true threat” he concluded. Not, in his view, even “a close call.”

Let’s talk about true threats — the kind of threats unprotected by the First Amendment. Today’s example is @briscoecain, who is what you’d get if you asked a Portland arts collective to make a cartoon of a Texan.

Briscoe is a tough guy! /1 pic.twitter.com/C99wMhNiSh

Beto’s entire schtick as a candidate is to indignantly and profanely bluster about issues of which he has no knowledge. This exchange and others like it prove that his desperation for power knows no limits of civility or regard for jurisprudence –  the Constitution be damned.