Hospitals are becoming flooded with cases of newborns addicted to heroin in Ohio, where the opioid epidemic is also causing a sharp spike in the number of children in foster care.

Social services in the greater Cincinnati region are sounding the alarm on the damage the opioid epidemic is having on children. Officials at the Cincinnati Children’s Hospital Medical Center report a 14-fold increase in the number of newborns suffering from heroin or other opioid related withdrawals since 2009 at hospitals in the Greater Cincinnati region. Roughly 3.3 percent of babies born in the region are exposed to opioids while in the womb, reports WCPO.

“It’s a new issue that we never had to deal with until the prescription opioid epidemic happened,” Dr. Scott Wexelblatt, regional director of newborn services at the Perinatal Institute at Cincinnati Children’s Hospital Medical Center, told WCPO. “It started filling up our special care nurseries and our Neonatal Intensive Care Units.”

Officials are also blaming the heroin scourge for a record amount of calls to Hamilton County Job and Family Services. Their phone line for reporting child abuse and neglect usually receives roughly 300 to 450 calls per month, but that number surged to 700 in October. They say opioids are the main driver of a 19 percent spike in the number of kids removed from parental custody for foster care since 2010 across the state.

Ohio is not the only state experiencing the disturbing trend. The Wisconsin Department of Health Services revealed the rate of babies born exposed to opioids more than quadrupled over the past decade. Officials recorded 598 babies born with an opioid addiction in 2015, up from 142 cases in 2006. In Missouri at least eight-in-1,000 babies born will now suffer opioid withdrawals, an increase of 538 percent since 2006.

With Trump’s Executive Orders Held Up In Court Over 8,400 Refugees Have Come To The U.S. 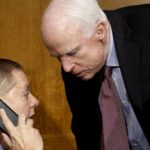 It Could Be Close: Counting To 51 On The Nuclear Option