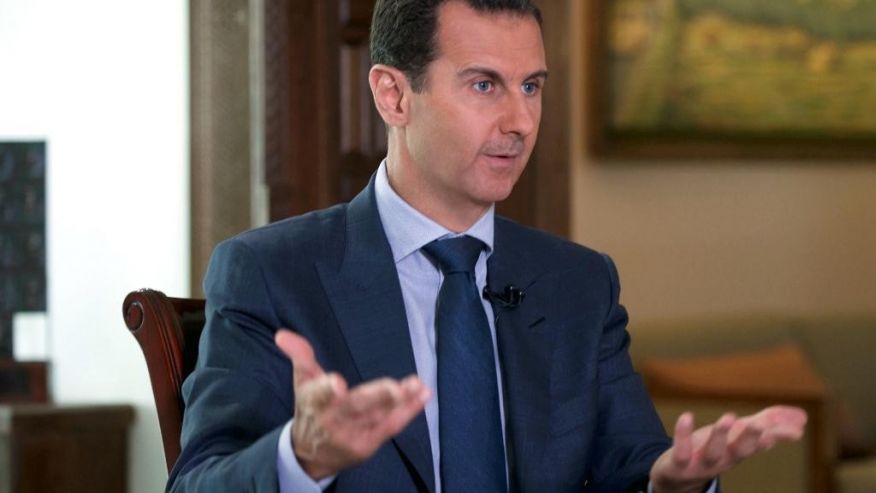 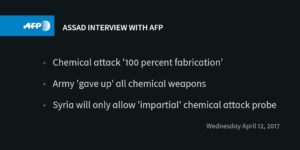 “Definitely, 100 percent for us, it’s fabrication… Our impression is that the West, mainly the United States, is hand-in-glove with the terrorists,” Assad declared.

He continued, “they fabricated the whole story in order to have a pretext for the attack.” Assad further claimed the Syrian Arab Army relinquished all of its chemical weapons stock under the terms of a 2013 deal brokered between the U.S. and Russia.

“How can you verify a video? You have a lot of fake videos now,” Assad said veering into conjecture. He continued, “We don’t know whether those dead children were killed in Khan Sheikhun. Were they dead at all?”

“There was no order to make any attack, we don’t have any chemical weapons, we gave up our arsenal a few years ago,” he insisted. Assad however added, “Even if we have them, we wouldn’t use them, and we have never used our chemical arsenal in our history.”

Assad’s claims lie in stark contrast to statements from the Trump administration, which definitively ascribed the attack to the Syrian regime. U.S. intelligence officials told CNN they have intercepted communications of Syrian military experts planning the attack days prior.

“There is no doubt the Syrian regime is responsible for the decision to attack and for the attack itself,” Secretary of Defense James Mattis declared Tuesday.

Finding Liberty in “The Lord of the Rings”