What About Chase? Circumcision & The Right To Bodily Integrity

This Circumcision Debate Should Be About The Question: What Is In Chase’s Best Interest? 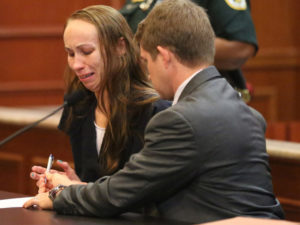 Heather Hironimus signing consent for her son to be circumcised.

Last week pictures began to flood Facebook News Feeds and elsewhere, a crying mother signing a “consent” form for her 4.5 year old son to be circumcised. The image was certainly disturbing — a woman, clearly distraught, signing a piece of paper apparently under duress. The image was powerful, the captions describing a terrible decision.

Author’s disclosure: I researched to try to find a copy of the Parental Agreement mentioned below. I was unable to. The list below was compiled by combing through copious reports, the court statements I could find, and trying to parse through the loaded language on both sides of the fight in various heavily biased news stories and editorials. I clearly have my own bias, but I prefer to disclose facts as openly as possible and then add my opinions afterwards.

Looking into things, the quick facts of the story come to light:

Outside observers of this case generally agree on a few things:

Where they differ are in a few points:

Researching this case I’ve found a number of nuanced comments, though most stating the court is in the right to enforce the Nebus’ wishes given the pre-determined contract.

RELATED: Why do girls have a right to genital integrity, but not boys?

However, as someone interested in custodial agreements and in bodily integrity, I think we’re missing a lot of details here.

Parenting agreements vary state by state, but usually stipulate a variety of details regarding the raising of children between split households. They include things like monetary support, physical custody arrangements, medical rights, responsibilities, education and more. Parenting agreements are common in divorces, and generally agreed upon privately, between two parents, without the involvement of the courts at all (if there are disputes, those are arbitrated by courts). Florida appears to require approval by the courts to determine if the plan is in the best interests of the child.

Parenting Plans in Florida can be modified by parents upon mutual agreement, otherwise they require a showing of a “substantial, material and unanticipated change of circumstances”. Under the substantial change test, the moving party must show both that 1. the circumstances have substantially and materially changed since the custody determination and 2. the child’s best interests justify the change.

Having observed a number of divorces involving minor children (none in Florida, however), I’m surprised about a few things in this case:

I’m generally opposed to routine infant circumcision, as I believe bodily autonomy is essential to liberty. However, in the event a circumcision or other alteration is medically necessary due to a number of real complications that could potentially arise, I have no issue with parents making these sorts of decisions for a minor child.

This is, however, another case in which Americans are beginning to be made aware of how unnecessary routine infant circumcision is, and questioning whether or not a parenting agreement should be allowed to make this sort of decision for a child in the first place. We have a federal ban on female circumcision in this country. In fact, we refer to it as “female genital mutilation”, which I think we should. How long until we begin, in common usage, to refer to male circumcision as the same?

Is this case an example of government overreach? Ironically, I often say that we must be careful with over-application of law, for it is a blunt instrument when what we may need is a scalpel. In this case, we have a very literal scalpel when perhaps none is needed at all. Either way, Chase is soon to undergo a painful, irreparable modification to his body, while his mother tried to fight it, and his father pursued it.

The court did what it agreed to do: arbitrate the dispute regarding the contract, and in that, it may have technically been in the right. In any other case, regarding any other stipulation, it probably would be. However, when justice is blind, it can also be ignorant: willfully ignoring that perhaps what was contracted shouldn’t have been either parent’s right to agree to.

I hope, for Chase’s sake, that it really was medically necessary, and not just some arbitrary preference his father forced on him

I fight for women’s rights to have control over their bodies, I’ll fight for every little boy’s too.

My body, my choice. His body, his choice. Our bodies. Our own choices.