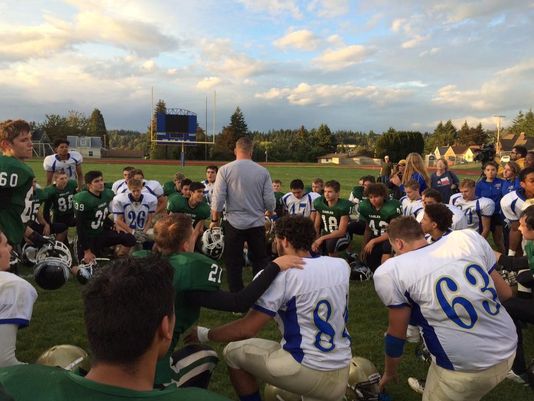 A Washington school district has said it will not fire one of its football coaches who drew national headlines for praying with the team on the 50-yard-line after games. But the district has forbid the coach from supervising or encouraging any prayer whatsoever.

It remains unclear how the district will react if the coach defies the district and continues to pray publicly with the students.

“Our coaching staff can continue to provide motivational, inspirational talks to students before, during and after games and other team activity, focusing on appropriate themes such as unity, teamwork, responsibility, safety and endeavor,” Bremerton Superintendent Aaron Leavell said in a statement provided to The Daily Caller News Foundation.

“However, talks with students may not include religious expression, including prayer. They must remain entirely secular in nature, so as to avoid alienation of any team member and, importantly, violate the law and our board policy.”

The assistant Varsity coach, Joe Kennedy, reportedly told the school board he would stop praying with the team, a district spokesperson told King5News.

The school said it hired an outside attorney to investigate the constitutionality of the coach’s after-game prayers, but the investigation drew national scrutiny.

Now they’ve decided not to fire the coach but given him this strong warning. The district said it will not make any more statements on the matter.

Congress Still Has No Plan To Avoid Looming Government Shutdown