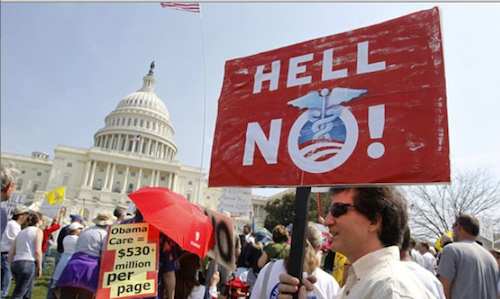 Thom Hartmann invited the editor of The Libertarian Republic news magazine onto his show to debate whether citizens should have a right to free healthcare. Hartmann cited a case where a sick homeless man threatened President Obama’s life as a means to seek free treatment for his illnesses in prison. When the interview started though, Hartmann cited a case whereby Presidential Candidate Ron Paul’s campaign aide Kent Snyder died from complications with pneumonia in 2008. Thom blamed Snyders death directly on Congressman Paul claiming that because he did not provide him health insurance he was the reason for his death. It was a new low in cable news  and a sad day for Americans who care deeply about their loved ones who suffer from terminal illness.

Your humble editor had fully prepared dozens of facts and statistics citing the danger of government medicine but when the Russia Today host personally attacked the former Texas Congressman Ron Paul, those went out the window and I exploded. I’d like to apologize to my readers for my misbehavior. When I was fourteen years old my mother died as a result of ovarian cancer. It was a complication exacerbated by the C-section that I required to be born and that would force my mother to receive a hysterectomy. Adding insult to injury was the revelation that a pharmacist in Kansas City, Robert Courtney, was diluting her chemotherapy drugs and that of thousands of other patients. Throughout the yearlong process of her death and the subsequent revelation that she had likely been poisoned by ill prescribed chemo, my family did not seek state assistance to pay for her medical bills. It was because of the fact that she and my father had started a small family business that we could afford the expensive treatments and medications needed to help ease her suffering.

And despite the fact that Robert Courtney was clearly capitalizing from inflicting suffering on others, I do NOT believe that most doctors or health insurance companies, pharmacists or drug companies are like this man. Rather I believe that they are more like the wonderful team of oncologists that worked so hard to save my mothers life. It was a team of doctors that were the ones to discover the mountebank and his schemes. And they did not do that out of a profit motive. They did it out of the kindness of their hearts because their care for the sick and the dying went above just their treating of their own patients. They did what was right because it was the right thing to do. Because of this, I believe that overall people are good and when we are faced with tragedy or difficulty we will work together voluntary and peacefully to help one another.

Thom stated in the interview that he believed it was possible to run a system where absolutely everyone could receive healthcare. That isn’t even true in the best run healthcare systems of Europe or Canada. People with pathological diseases routinely die while awaiting treatment, or they flee to the United States where they can receive medical care in a short amount of time. You see, capitalists such as myself do not argue that it is possible to give everyone everything they need. That is ridiculous to believe. But what we do argue is that the profit incentive lowers costs and gives doctors the incentive to compete for customers because more customers means more profits. And more profits means more investment into life saving technologies. That means that capitalism will give more people on whole the ability to receive better healthcare. It doesn’t mean a perfect system. The only people who believe that a perfect system could exist are communist utopists and politicians willing to lie to get votes. 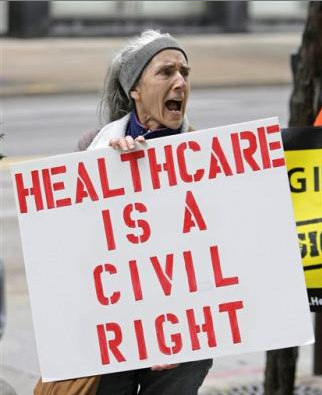 Hartmann was unapologetic in his defense of the use of violence to achieve his ends. It’s a common understanding that socialists do not adhere to the non-aggression principle. Violence is simply another means to their ends of attempting to achieve a perfect utopian society No matter how many people suffer and die under socialist and communist healthcare systems they are absolutely unwilling to accept the reality that the reason America has the best health care system in the world is because we are one of the freest healthcare systems still in existence. But that is sadly coming to an end with the ushering in of Obamacare and the implementation of the state exchanges that will move us towards a more European style model.

I attempted to explain to Thom how positive rights differed from negative rights. A right is something that must be provided. The difference between negative rights and positive rights are that positive rights are rights that involve redistributing something from one person to give to another. A negative right is a right that can be exercised without a requirement that something be provided to you in order to exercise it. An example of a negative right is free speech. I am not required to tax anyone to express my right to free speech. I can engage in it freely. A positive right would be something like saying that food or water or healthcare must be provided and the mechanism for that is taxation or confiscation. The argument over whether positive rights are rights at all is a heated debate. Some hardcore anarchists claim that no one has positive rights, not even babies. But if that were true, does it mean that mothers should legally be allowed to leave their babies in dumpsters because they are not obligated to provide a positive right to food or healthcare? Libertarians generally fall on the line of arguing that only negative rights exist mostly and if government is to exist at all it’s sole purpose is to protect life, liberty and the pursuit of happiness. If any positive rights exist at all they are to be reserved only for children who are unable to provide for themselves the means to pursue life, liberty or happiness. This is what has differentiated free market economists such as Friedrich Hayek who argued for a limited social safety net and Murray Rothbard who was an anarcho-capitalist.

Do you believe that people have positive rights? What about children? If you’re a libertarian would you say you agree more with Hayek on the idea of a limited state and a social safety net? Or are you more of a Rothbardian who states that no one, not even children have positive rights? Leave your thoughts below.