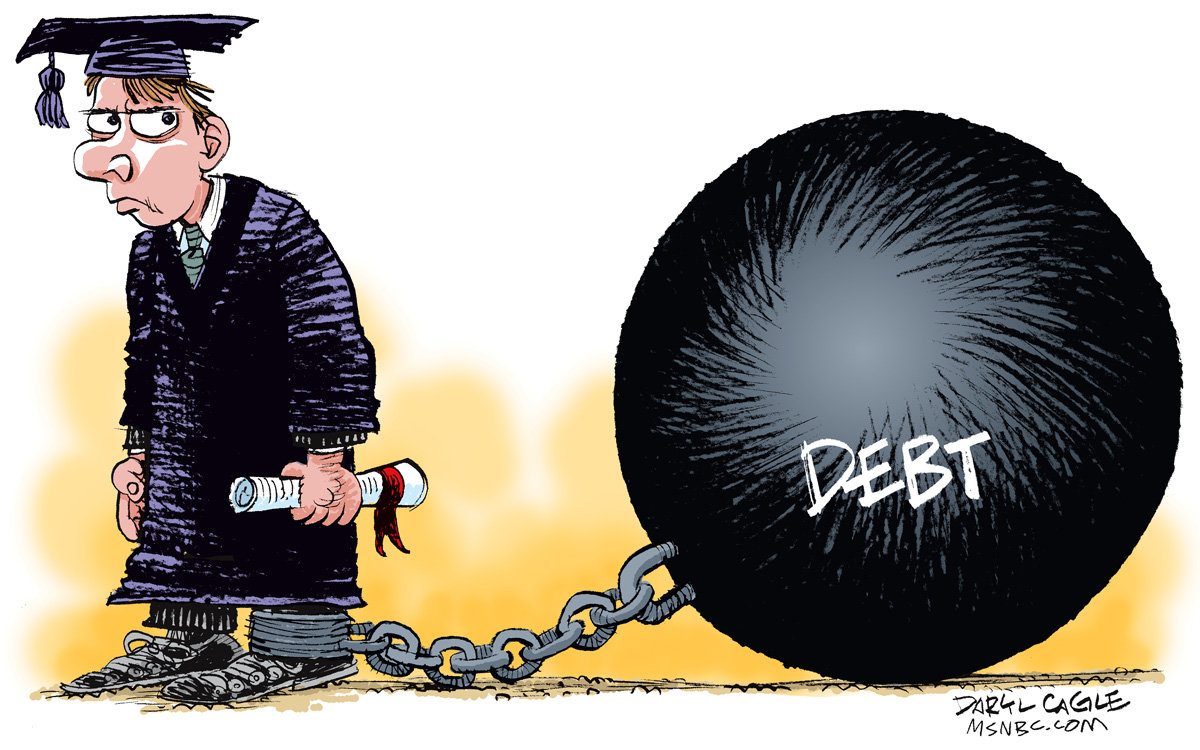 Bernie Sanders, of course, proposes free college at public universities while Hillary Clinton has her own plan to spend $350 billion over a ten year span to help pay for college. Marco Rubio has his own plan which includes having colleges show the costs and benefits of particular majors. Rand Paul has proposed to make student loans tax deductible.

Student loan debt can be crushing. According to a Wall Street Journal article, the average Class of 2015 graduate will have to pay about $35,000 in student loans. Just twenty years earlier it was only $10,000.

However, there is a new change in how student loans can be paid for. Bankruptcy courts. Bankruptcy is a way for American consumers and companies to have consumer debt forgiven. Due to changes Congress made to bankruptcy law back in the 70’s, this relief option was not available for student loan debt. The only way bankruptcy could apply to student loans is if the debt caused ‘undue hardships.’ However, now a court case may change that and allow for debt burdened students to file bankruptcy.

The case centers on one man in Boston who could change the rules for millions of Americans.

Robert Murphy is a 65 year-old man who is having his bankruptcy claim being considered by the First Circuit Court of Appeals. He took federal Parent Plus loans from 2001 to 2007 in order to send three children to college. The bill ballooned to over $235,000 after it incurred interest. Murphy used to be a president of a manufacturing company before it shipped overseas, as a result he hasn’t had a job in the last thirteen years. He’s drained his life’s savings and is living on his wife’s income of $15,000 dollars.

Judges haven’t made a huge impact on student loan debt relief. However, since a federal judge will be hearing Murphy’s case, it will be the first in a decade to affect student loan debt relief. If the federal court rules in favor of Murphy, it can provide relief for many student borrowers. However, the federal government won’t be happy. That’s because if people can erase their student loan the feds will potentially lose a lot of money it has doled out to parents and students.

The total is around $1.2 trillion, with an average of $35,000 per graduate; enough to potentially disrupt an entire section of the public sector. The federal government, which is already has $18 trillion in debt, would be plunged further into debt if they aren’t able to collect all the loans it dolled out to students.

The Department of Education, through a loan service called ECMC, has aggressively fought student loan borrowers looking to get debt relief in bankruptcy court. ECMC has called for judges to be draconian when it comes to them deciding whether to forgive student loan debt.

Lawyers for ECMC have attacked Murphy on the grounds that he hasn’t been looking for a job hard enough; Murphy counters that he has. Bottom line, if this court battle goes Murphy’s way, it will call into question how much of the $1.2 trillion the federal government has loaned out to students will be collectible and what it will mean for the economy.

Noah Champlin, my roommate at Cal Poly, has student loans. Kendrick Dilma, another Cal Poly student majoring in Aerospace engineering, has subsidized federal loans to help pay for college. Noah, who is majoring in construction management, sees student loans as an investment into his future; mostly due to the almost guaranteed prospect of him getting a job right after graduating. Kendrick thinks they are good if you need one; however, he believes in the federal government should mandate that all universities should lower tuition.

Maybe this is in an indication that government should get out of the loan business all together. Time and time again, big government solutions to this may not work or may even make the situation worse. The average student loan debt is nearly triple from twenty years ago. It may be more prudent for students to wait until they have a way to pay for college like scholarships or grants. It’s also wise for students to look into their major to determine is employment prospects are good. Students like Noah Champlin, are almost guaranteed jobs due to the need for it. Same with Kendrick Dilma. That’s the beauty of the free market working right there.

Student loan debt is a massive problem in this country. There is no one solution. But the solution is not going to be plunging this country further into debt by offering free college (remember, there is no free lunch) nor by paying $350 billion dollars over 10 years. The last thing we need is the government throwing more money at the problem.

Maybe it’s time to reexamine how we see college and maybe we decide not to spend $100,000 to get a degree in something useless like Art History.

The Secret Behind Donald Trump’s Mojo