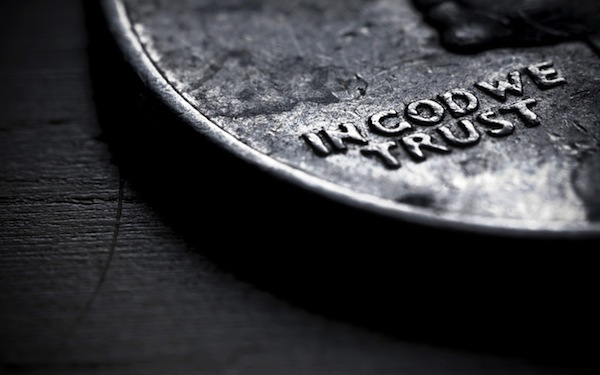 The debate over the motto IN GOD WE TRUST has been waged ever since it was first requested that it be placed on U.S. currency in 1861. But what are the real origins of the motto? And should it be on our shared national currency?

It is believed that the first citizen to appeal that it be minted on coins was Rev. M.R. Watkinson, who was the Minister of Gospel at a church in Ridleyville, Pennsylvania.

Dear Sir: You are about to submit your annual report to the Congress respecting the affairs of the national finances.

One fact touching our currency has hitherto been seriously overlooked. I mean the recognition of the Almighty God in some form on our coins.

You are probably a Christian. What if our Republic were not shattered beyond reconstruction? Would not the antiquaries of succeeding centuries rightly reason from our past that we were a heathen nation? What I propose is that instead of the goddess of liberty we shall have next inside the 13 stars a ring inscribed with the words PERPETUAL UNION; within the ring the allseeing eye, crowned with a halo; beneath this eye the American flag, bearing in its field stars equal to the number of the States united; in the folds of the bars the words GOD, LIBERTY, LAW.

This would make a beautiful coin, to which no possible citizen could object. This would relieve us from the ignominy of heathenism. This would place us openly under the Divine protection we have personally claimed. From my hearth I have felt our national shame in disowning God as not the least of our present national disasters.

To you first I address a subject that must be agitated.

Secretary Chase then wrote a letter to the Director of the Philadelphia Mint James Pollock indicating that he should prepare an appropriate motto on November 20th, 1861.

Dear Sir: No nation can be strong except in the strength of God, or safe except in His defense. The trust of our people in God should be declared on our national coins.

You will cause a device to be prepared without unnecessary delay with a motto expressing in the fewest and tersest words possible this national recognition.

The mint could not make the changes without an act of Congress, so in December of 1864 an act of legislation was passed that approved a change in composition of the one-cent coin as well as authorized the minting of a two-cent coin. Secretary Chase had approved mottoes that read IN GOD WE TRUST, which then first appeared on the 1864 two-cent coin.

In February of 1873, Congress passed the Coinage Act, which stated that the Treasury Secretary, “may cause the motto IN GOD WE TRUST to be inscribed on such coins as shall admit of such motto.” 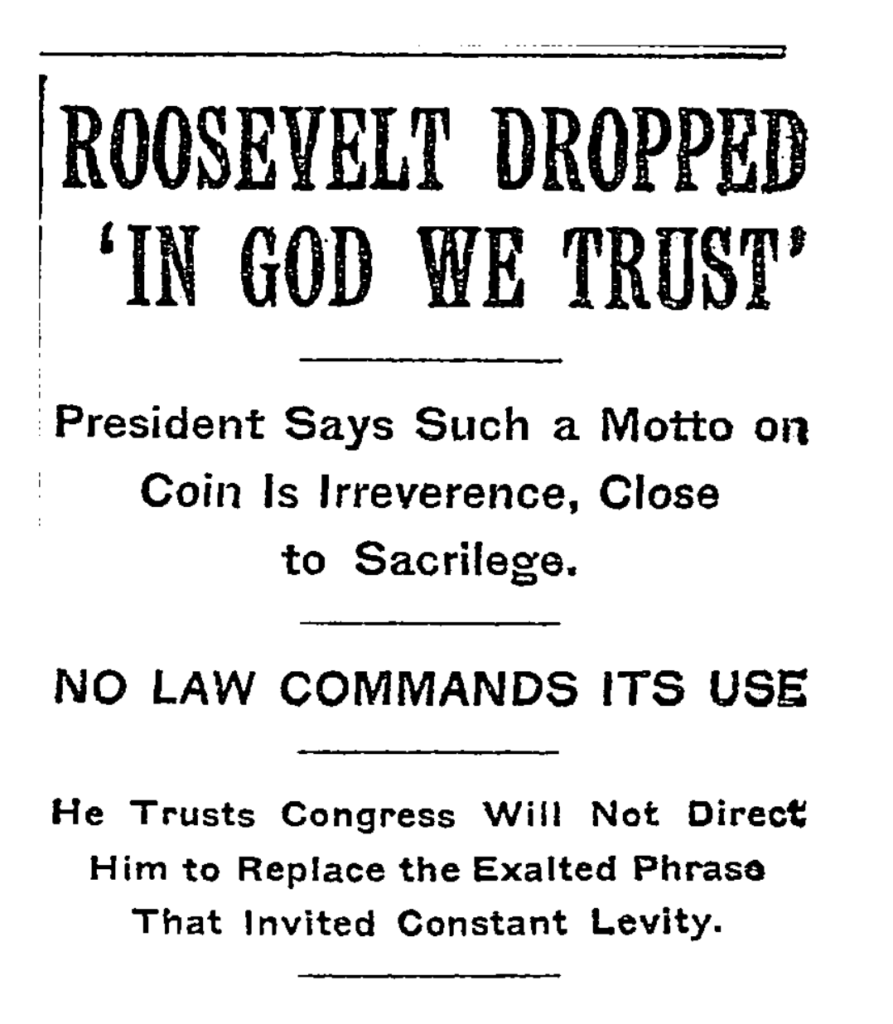 President Theodore Roosevelt, who had been a Sunday School teacher, strongly believed in the separation of church and state. When he took office after McKinley’s assassination, he deliberately did not swear on a bible and he did not believe that currency should bear IN GOD WE TRUST because money is used to buy worldly goods and services.

Roosevelt said in 1907, “My own feeling in the matter is due to my very firm conviction that to put such a motto on coins, or to use it in any kindred manner, not only does no good but does positive harm, and is in effect irreverence, which comes dangerously close to sacrilege…”

The motto reappeared in 1938, when Congress initiated the production of the Jefferson nickel. All coins in the United States since 1938 have bore the motto.

IN GOD WE TRUST first appeared on paper money in 1957 with the arrival of the one-dollar silver certificate. The addition of the motto to all paper currency occurred when the Bureau of Engraving and Printing converted to the dry intaglio printing processes. President Dwight D. Eisenhower signed a law that officially declared that IN GOD WE TRUST was the nation’s motto, two years after he had also pushed to have the phrase “under God” inserted into the pledge of allegiance.

The motto appears above the podium in the U.S. Congress as well as appearing on other government buildings. Pennsylvania public school districts were recently required to post the motto in every school building. Pennsylvania’s House of Representatives passed ‘The National Motto Display Act’ by a 14-9 vote and will require IN GOD WE TRUST to be displayed on a mounted plaque, student artwork, or some other form. Janice Rael, the vice president of the Delaware Valley chapter of the Americans United for Separation of Church and State said she believed that the proposal promotes religion over absence of religion.

Secularists unsuccessfully sued to have the motto removed from U.S. currency this year. The case brought against the U.S. Treasury Department was dismissed by a federal court. U.S. District Judge Harold Baer, Jr., wrote that “the Supreme Court has repeatedly assumed the motto’s secular purpose and effect,”according to the Associated Press. Baer also ruled that the federal appeals courts “have found no constitutional violation in the motto’s inclusion on currency,” and that the placement of the phrase didn’t constitute a “substantial burden” on secularists.

Although the motto is now law, should it be? Does it promote belief over non-belief? And if it does, where does that leave those patriots who love their country but do not share the same faith?

Many people argue that the concept of God is universal, and that it applies to people of all faiths, and even of those who just believe in a higher power. But maybe they might pause and reflect on how they might feel if the motto read IN ALLAH WE TRUST instead? The word Allah is just another name for God. Replacing the word “God” with “Allah” wouldn’t place any “substantial burden” on the religious. But the mere mention of it in this context would likely encourage anger from some quarters, who understandably feel there is an agenda being promoted that is not their own. Secularists feel this way in regards to the motto overall.

On April 21, 1787 the Congress of the Confederation of the United States authorized the design of America’s very first copper penny. The coin depicted the sun shining down on a sundial with the caption “Fugio” which is latin for I flee/fly. The little penny, designed most likely by Benjamin Franklin, gave the holder the best piece of advice ever written on any money anywhere. The Congress should move quickly to replace it on the U.S. currency and public buildings post haste. What did the Fugio cent say?