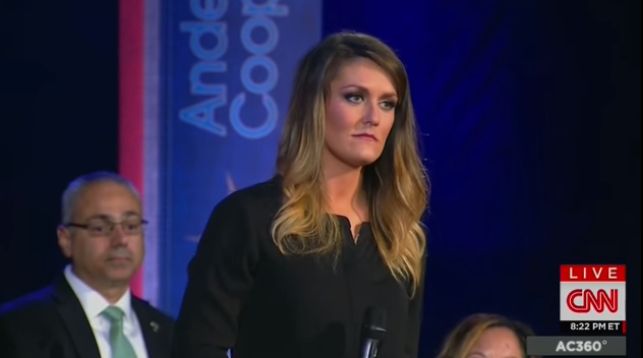 Kimberly Corban is a mother of two who survived a rape in 2006 while she was at college in Colorado. She confronted the president at CNN’s “Guns in America” town hall event.

“As a survivor of rape and now a mother to two small children, you know it seems like being able to purchase a firearm of my choosing and being able to carry that where me and my family are — it seems like my basic responsibility as a parent at this point,” Corban told President Obama. “I have been unspeakably victimized once already and I refuse to let that happen again to myself or my kids.”

“So why can’t your administration see that these restrictions that you’re putting to make it harder for me to own a gun or harder for me to take that where I need to be is actually just making my kids and I less safe?” she asked.

Obama maintained that “there is nothing that we have proposed that would make it harder for you to purchase a firearm.”

“Now you may be referring to issues like concealed carry, but those are state-by-state decisions. And we are not making any proposals with respect to what states are doing … so there really is nothing that we are proposing that makes it harder for you to purchase a firearm if you need one,” he said.

The president went on the downplay the notion that guns make people safer.

“There are always questions as to whether or not having a firearm in the home protects you from that kind of violence,” the president said. “And I’m not sure we can resolve that — people argue it both sides. What is true is that you have to be pretty well-trained in order to fire a weapon against someone who is assaulting you and catches you by surprise. What is also true is always that possibility that firearm in the home leads to a tragic accident.”