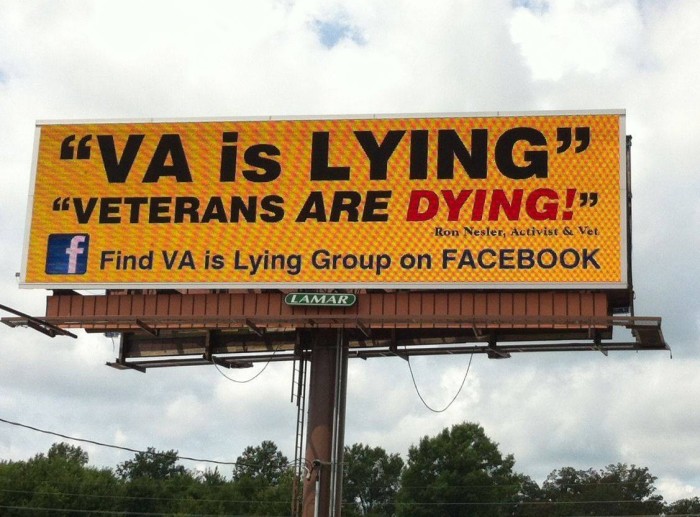 Directly across from the Department of Veterans Affairs facility in Phoenix stands a large billboard which reads, “VA Is Lying, Veterans Are Dying.”

The billboard is new as of Monday.

The Phoenix VA has become emblematic of scandal and corruption in the department. Whistleblower retaliation, police corruption, unauthorized access of private medical records, manipulating waitlists and poor staffing of the emergency room are just some of the allegations the embittered facility has had to face. It is ground zero of the waitlist manipulation controversy, which began in 2014 and led to the resignation of then-VA Secretary Eric Shinseki.

One group, called “The VA is Lying”, thinks that the department prefers public relations spin and cover up to real accountability and reform. To send a message, the group is posting gigantic billboards outside some of the most troubled facilities in the country. Another billboard recently went up in Tampa. (RELATED: ‘The VA Is Lying, Veterans Are Dying’ Says Giant Billboard In Tampa)

“We contend that VA is wildly corrupt and is currently operated for the profit and luxury of VA employees, VA contractors and certain corrupt politicians,” a VA is Lying press release read. “We hold that every member of Congress knows this. Many BILLIONS of tax dollars are devoured by VA each year, while VA consistently tells veterans there is no money for veteran health care.”

Brandon Coleman, a whistleblower at the facility who has suffered retaliation, was present for the opening of the billboard.

“The location of the billboard in Phoenix is perfect,” Coleman told The Daily Caller News Foundation. “It is directly across the street from the hospital which has also come to be known as “Ground Zero” in the VA scandal that started in 2014. In fact when director Glen Grippen shows up to work on Tuesday and looks out his window he will see the ‘VA is Lying’ sign perfectly. The sign lets these corrupt administrators know we are watching and we are not going away.”

Media Bias: CNN Not Looking to Start a Fight Between Democrats in Debate

[POLL] Who Should Be the Libertarian Party’s 2016 Presidential Candidate?