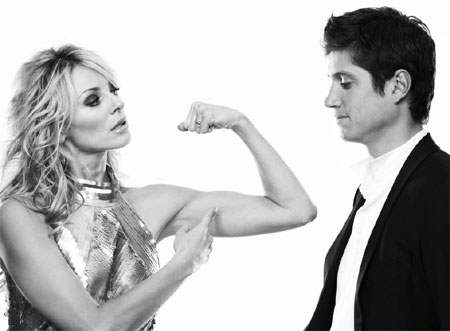 Women Up, Men Down?

DALLAS, November 7th, 2013 – A new study suggests that a man’s ego may be negatively impacted by their partner’s life successes. 896 mostly college-aged Dutch & American individuals underwent five experiments. One experiment asked each to write about situations in which their partner succeeded or failed. While the woman’s self-esteem and relationship outlook were unaffected by their partner’s success, male self-worth declined.

The study’s lead author, University of Florida’s Dr. Kate A. Ratliff, determined that men may view a partner’s success as their own failure because of “gender stereotypes, male competitiveness and ego”.

“On average, men are more competitive than women,” Ratliff said. “So it’s definitely possible that men would respond in a self-negative way to anybody’s success.” As a result, men can act irrationally, unaware of the internalized failure their partner’s successes truly make them feel.

“Maybe they do things that they don’t understand themselves. The guy is giving the impression that he’s not that into the relationship, when in reality he’s just trying to protect himself from the fear of rejection,” Dr. Ratliff writes. They are also apparently oblivious to these alleged dips in self-esteem, both in daily life and during the study.

The results excited clinical psychologists who are focused on gender issues. Jill Weber, a California clinical psychologist, explained to the Post, “What makes the new study so fascinating is that the men who participated weren’t even aware that their self-esteem was affected by their partners’ performance. This, she said, could cause problems later on.” [contextly_sidebar id=”7b30f6a797e5d1bc74ee96cc62e38458″]

The Post article quotes experts such as Hannah Rosin, author of “The End of Men”, to conclude that these subconscious feelings and fears branch from obsolete perceptions of gender-roles. While the researchers may have had good intentions, from the Post piece some could conclude the study assumes that men, with their fragile egos and insecurities, are hardly self-aware enough to understand the impact of their insecurities on relationships. Despite changing attitudes about gender roles, mutual respect and equality, they think men are still secret, insecure sexists.

The study itself was highly subjective and skeptics should approach conclusions from indirect, uncontrolled social-psychology reports cautiously. Earlier studies from the Society for Personality and Social Psychology evaluated the tests used by academics to measure implicit self-esteem. The study concluded that the “bi-polar framework” of the Implicit Association Test (IAT) cages results.

“It is impossible to increase positive feeling toward one (association) without decreasing the overall measure of esteem (a contrast effect); no assimilation effects are possible,” writes Andrew Karpinski of Temple University.

Furthermore, the devil is in the details and the experiment simply recorded results without delving into causes.

Perhaps the career advancement of these male’s partners made them feel saddened by their own prospects in an increasingly female-centric society and economy? Could our materialistic culture reinforce the “need” to be the breadwinner, to hustle, provide and be a “baller” getting money? Women often play a role in reinforcing gender-norms that men allegedly cling to at their own peril. Did their female companions, despite their success, indicated their desire that their male partner contribute more?

Millennial women are more focused on their careers and this impacts relationships. In response to the questions, could those males studied feel frustrated, disappointed or saddened by the toll his partner’s successes may have on the relationship itself?

Millennial men value “ensuring financial security for my family in the long run” as a top personal priority, so a power-partner contributing more to this effort could make them inwardly reflective. But is this because the eternally selfish “male ego” raging for gratification or a desire to genuinely contribute more to their relationships? Wouldn’t exploring the causes of these feelings be more beneficial than confirming biases? This, to me, is a far more interesting question.

Women that out-earn their partners do reverse the traditional western-male-provider dynamic that was once the cornerstone of society, but this is not our grandfather’s generation. A 20-year study of Wharton College graduates suggests men are now more egalitarian in relationships and driven to jointly decide relationship roles, both at home and the work place.

“Millennial men are increasingly motivated to experiment with new models for how both partners can have more of what each wants in life,” writes Stewart D. Friedman, Practice Professor of Management at the Wharton School. “We found that young men today are less inclined to believe that one partner in a dual-earner relationship should be more involved and advanced in their career than the other.”

Countless studies support that millennial males are more comfortable power-sharing with high-achieving females. In matters of the heart, they often seek team mates, not a partner to dominate. Consider that they see women as truly equal partners. Give them some credit for seeking balance between home life and work like no generation before.

That was the feminist goal after all, right…? Right?

While some insecure men may view female “breadwinners” as a threat to their self-worth, this generation’s males have come of age in completely different world than their fathers. Though some or none may or may not value traditional gender roles in various ways, the women they love are not those of the past. Simplifying their feelings and reactions to changing trends by blaming their ego or insecurity is tiresome.

Men, contrary to popular belief, are not simple, oblivious creatures with perpetually raging egos and one-track minds. They experience complex thoughts, associations and feelings in response to relationships and society. The study’s analysis of how the millennial male responds to evolving gender roles clings to yesterday’s catch-alls of blaming male ego instead of breaking new ground.

If social psychologists truly seek to explore evolving gender differences in this bold, new era they can begin by treating men as if they’re capable of complex feelings.