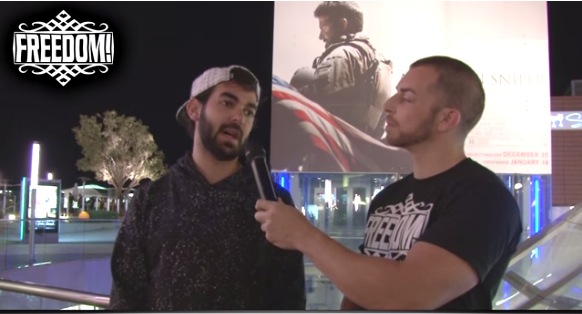 Iraq war veteran and anarchist activist Adam Kokesh stood outside screenings of the American Sniper film and asked moviegoers seriously important questions about their feelings on the movie and matters of foreign policy.

Kokesh’s video was featured on the Daily Dot, which produced an excellent exploratory piece on Kokesh, critically analyzing his anti-war beliefs. Kokesh aggressively quizzes the moviegoers with questions they were obviously unprepared for. And while it may feel like a setup, these are the types of tough questions that the American people need to ponder. Many of the interviewees were clearly unprepared for someone with rhetorical skills as strong as Adam’s.

From the Daily Dot:

“Would you say Chris Kyle is a hero for defending the homeland?” Kokesh asks people exiting the movie. “Do you think that defending your homeland and risking your life to do that makes you a hero.”

“What it means to be a hero is protecting others and keeping them out of harms way,” replied one woman.

“Protecting anyone who you think is family, I guess,” she shrugged.

“Defending their homeland?” she answered.

“Are you saying that insurgents in Iraq are the heroes?” he retorts.

The Daily Dot’s analysis of Kokesh’s motivations shows that Adam’s motivations are deeper than surface level. Kokesh isn’t just trying to do a gotcha piece. He’s questioning the reasoning behind why people unquestionably look at all soldiers as heroes all the time. After all, don’t the Iraqi insurgents see themselves as the heroes of the film, and Chris Kyle as the enemy?

The Libertarian Republic also pondered some of the deeper meanings of the film, in a film review here. We focused on the granular lessons of the film, the question of American wolves in sheepdog’s clothing. But sadly, like Adam Kokesh’s video, all it does is leave us with more questions than answers. Of course, that’s not Kokesh’s fault. The American people need to wise up, and take a good hard look at the policy makers who send people like Kyle into battle. The one real question that we think does have an answer is this: Are the politicians who send people like Kyle into battle sheepdogs or wolves? That’s easy.

Should Vaccines Be Voluntary? Science Babe to the Rescue! [PODCAST]