People still clinging to the idea that Democrats support civil liberties were in for a rude awakening yesterday, as House Democrats staged a “sit-in” to demand Americans be stripped of due process protections. The demonstration was to demand a vote on a bill to keep those on No-Fly lists from obtaining firearms.

On face value, this might seem like a reasonable standard. Upon closer observation, however, the bill represents a massive push towards an unlimited surveillance state with little-to-no oversight.

As reported by The Intercept, the government apparently has very lax standards for who can make it on a watch list. Per their report, “nearly half of the people on the U.S. government’s widely shared database of terrorist suspects are not connected to any known terrorist group.”

This should be a frightening concept to those that are even the least bit skeptical of an over-reaching government. If you’re Senator Chris Murphy, however, you’re likely more concerned with re-tweeting straw man arguments that deflect from the very real issues at hand. 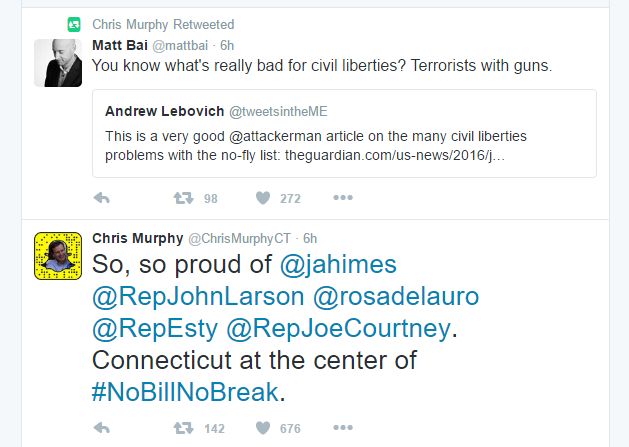 The reality is that as it exists right now, the term “terrorist” can be very arbitrarily assigned at the discretion of any given administration. Liberals should keep in mind that this term could be recklessly abused at the expense of unpopular minority groups.

Per the ACLU, the 98,153 population city Dearborn, Michigan has more watchlisted individuals than any city other than New York. It is hardly a coincidence that Dearborn is home to one of the country’s biggest Arab communities. Michigan’s own congressman, Justin Amash, took to Twitter to ridicule the Democrat’s bogus political exercise.

Democrats are staging a sit-in on the House floor. They refuse to leave until our Constitution replaces due process with secret lists.

The power to arbitrarily tie people’s constitutional liberties to a list they can be put on without due process is absurd. Without the proper checks, which clearly do not appear to exist, the entire Bill of Rights could be forfeit because some unknown bureaucrat wrote your name on a piece of paper.

For liberals still not convinced that things like due process should stand in the way of gun-grabbing efforts, consider these three words: President Donald Trump. Imagine how Trump, or any president you wouldn’t trust, could abuse the ability to preemptively strip rights from people without due process.

Democrats are fully within their rights to demand solutions to the gun violence issue being publicized by the media. They can pay the electoral price for directly voting to restrict the constitutionally guaranteed rights of Americans. However, it is a most cowardly act to try and abdicate the authority of gun restrictions to unknown bureaucrats with no true accountability to our system of checks and balances.

It’s hard to argue that those that plot the end of American society should be denied access to firearms. If the government wants to act on this, though, they should find a way to do it in a way that doesn’t compromise the rights of law abiding citizens. It shouldn’t take any special list to make that clear.

Robots In EU Could Soon Be Recognized As ‘Electronic Persons’