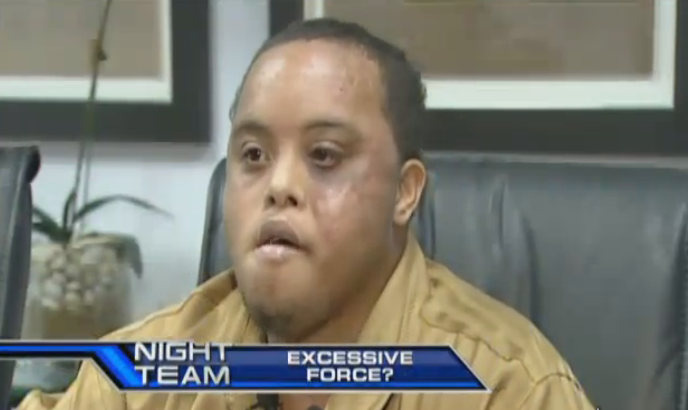 A story is circulating on the Internet about an event that occurred in 2011 that didn’t get much publicity. We highlight it on this site in order to help get the word out, as the family lawyer requested at the time.

MIAMI, FL – Gilberto Powell, also known as ‘Liko’, had just informed his family that he was walking home when he suddenly found himself the victim of violence. Officers wanted to conduct a pat down on Powell for a suspicious bulge in his pants, but Powell was frightened and ran.

The police officer slapped him across the face with an open hand, and knocked him to the ground. Then when they finally searched him, it was revealed that the bulge was his colostomy bag, and that Powell had Downs Syndrome.

The 22-year-old suffered severe bruises and a scar from the incident. “He had him by his boxers, so they took his pants off,” said Liko’s father, Gilberto Hernandez. “I felt helpless, because he was calling my name.”

The officer who beat the man, Fernando Villa was famous for passing out drunk behind the wheel of his squad car in boxer shorts with only his drunk foot stopping the vehicle from rolling out into a busy intersection.

He was also accused of headbutting and choking a woman while saying, “F*** you, b*tch. I feel like killing you,” though that complaint was never substantiated.