A Congress Of Historic Unpopularity 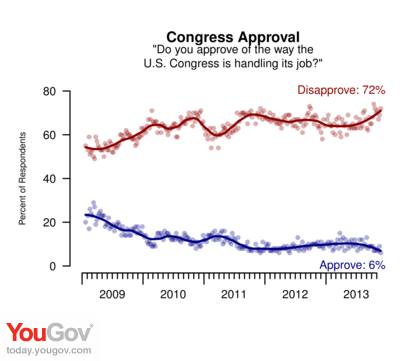 DALLAS, December 2nd, 2013 – A new poll claims that only 6% of Americans approve of Congress’s job performance. The poll covered only a handful of likely voters, 10% of which were Democrats, 7% of Republicans and 3% of independents. But other polls confirm the steadily declining approval for America’s lawmaking body.

Whether citing the government shutdown, budget woes, the soaring national debt, civil liberties concerns and or the healthcare reform disaster, Americans are fed up. According to Rasmussen, 78% of Americans want to fire Congress and start over with new, though 47% believe that neither party represents the American people.

A series of November surveys show Democrats lost the 9-point lead over Republicans after the 16-day government shutdown. The country’s sour opinion of congress and aversion to the unpopular healthcare reform law poses a threat to re-election, a fear President Barack Obama acknowledged. As a result, Democrats have already begun distancing themselves from Obama.

CNN Polling Director Keating Holland warned that Democrats could be in trouble, “There is just under a year to go before any votes are actually cast and the ‘generic ballot’ question is not necessarily a good predictor of the actual outcome of 435 separate elections,” he said. “A year before the 2010 midterms, for example, the Democrats held a six-point lead on the generic ballot but the GOP wound up regaining control of the House in that election cycle, thanks to an historic 63-seat pickup.”

The same poll shows Republicans leading Democrats on the generic ballot by a slim 2% margin, but trends from other polls indicate Americans are disillusioned with liberal leadership.

Obama’s approval ratings also bend to record lows. As of today, the Rasmussen Reports showed 54% of likely U.S. voters disapprove of President Obama’s job performance. These levels are the lowest of his presidency.

46% of polled Americans believe Obama knowingly lied when reassuring Americans they could keep their health insurance plans and 56% expect healthcare to be worse under Obamacare’s administration. 53% believe the Obama administration is incompetent.

How to beat liberals on the economy. (Rebuttal Oped)