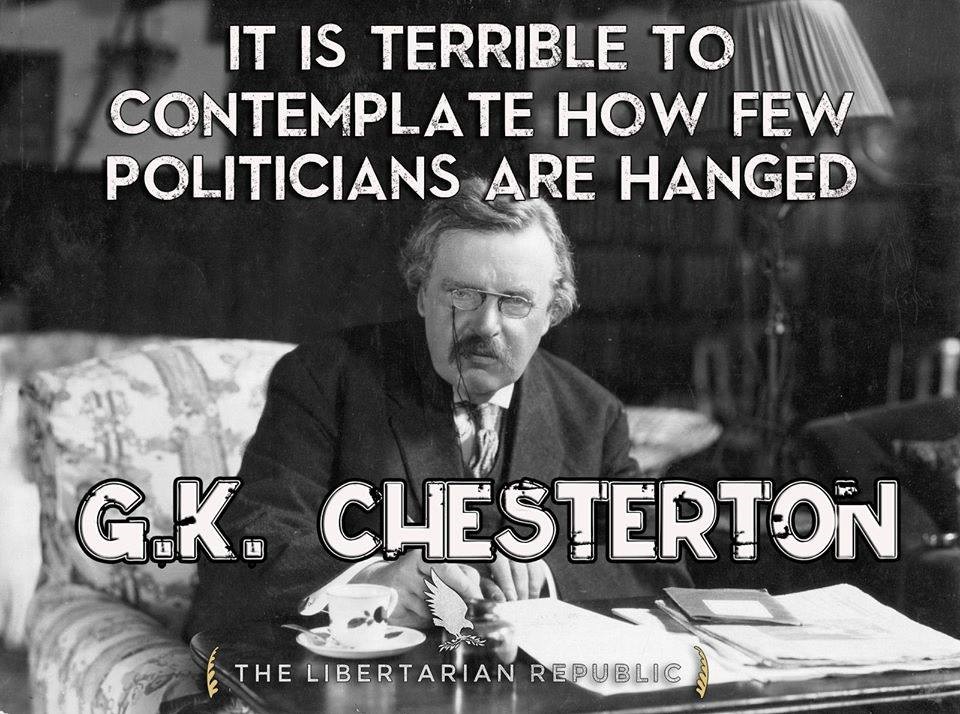 The English writer G.K. Chesterton said “it is terrible to contemplate how few politicians are hanged.” In the wake of Democratic legislator Leland Yee’s arrest for gun trafficking, one California politician agrees with him. Phil Wyman, a 17-year state senator and Republican candidate for attorney general, has called for corrupt politicians to be put to death.

“How can you even respond to something that ludicrous?” asked a spokesman for California’s Democratic president pro tem.

A poll on the CBS Sacramento website shows that thousands of people agree with Wyman.

Wyman isn’t merciless: he says he’d let corrupt politicians opt for an honorable death. “Firing squad, at least that’s a bit more macho than getting some other cocktail. Let that person choose. That person’s been at the pinnacle of power. If he wants to be executed by firing squad, let him,” said Wyman. “I want to discourage and teach the new generation about values – that nobody is above the law.”

Would Wyman’s idea reduce corruption? We might look to China for an example of Wyman’s suggestion in practice. After the 2007 Chinese export recalls, the Chinese government executed the head of its State Food and Drug Administration for accepting bribes. In 2011, the vice mayors of Hangzhou and Suzhou were executed for accepting bribes.

There is some reason to think that China’s anti-corruption policies have at least a marginal effect. China borders 15 other countries. According to Transparency International, China is less corrupt than 14 of these countries. The 15th, Bhutan, is the second least corrupt country in all of East Asia after Japan.

Yet corruption in China remains a monumental problem. Chinese people see corruption in their country as so endemic that visiting American officials often shock Chinese observers and attract viral media attention by buying cheap meals or paying for coffee themselves. When Treasury Secretary Jack Lew dined at a cheap dumpling restaurant in Beijing, one Chinese blogger commented “He must have done it purposely to embarrass Chinese officials.”

What Can We Learn About Politics From Game Of Thrones?