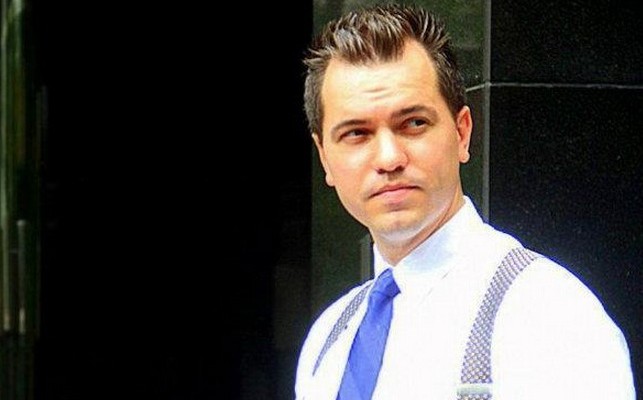 Former Libertarian Party Presidential candidate Austin Petersen received a 30-day ban on his personal facebook account yesterday for an unspecified TOS violation. Only one post was removed and it contained a video.  The video breaks down his take on Senator Clair McCaskill‘s anti-gun record, specifically her voting for the Assault Weapon Ban. Petersen is concurrently running a promotion which involves giving away an AR-15 – a weapon which would have been illegal under the ban.

The related posts regarding the AR-15 Giveaway are still available on his public and personal account, but the video he made was removed. 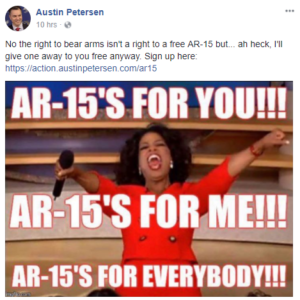 Petersen took to Twitter after the ban commenting on the situation:

My video talking about guns and calling out McCaskill for voting for weapons bans was removed and I was banned from Facebook. #context

Well at least I won’t get banned from talking about Claire McCaskill voting for gun bans on Twitter.

OpenSecrets.org shows Sen. McCaskill has received $15,800 in donations from Facebook Inc for her 2018 campaign. As you may know, Austin Petersen is the former Libertarian Party Presidential Candidate that is now planning to run against Sen. McCaskill (D) as a Republican for Missouri Senate.

When asked about the incident, Petersen said, “I understand that it’s a privately owned platform and they can do as they please, but sometimes social media is the only way that underdog candidates like us can get our message out.”

Many of his supporters are upset at Facebook for the ban, and they will be likely sharing his Twitter messages to Facebook. But you may to scratch your itch for a daily dose of Austin Petersen live on social media at Twitter for a month.