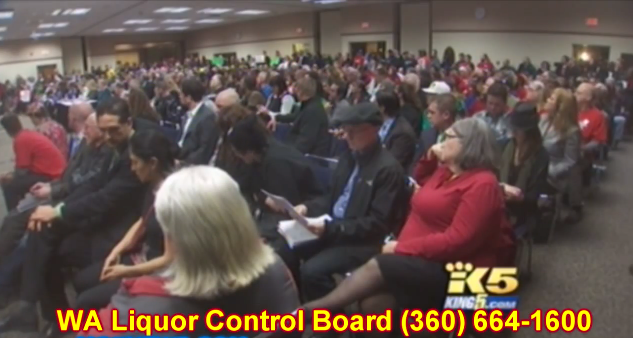 “We’re chronically ill here. We’re sorry that’s inconvenient for you and that’s inefficient, but maybe we don’t want to be a part of your profit making schemes!”

LACEY, WA – Hundreds of people packed into a meeting in Lacey, Washington to discuss proposed regulations on the forthcoming marijuana industry. The Washington State Liquor Control Board, Washington Dept. of Revenue and Governor Inslee’s senior policy adviser have been planning in secret to enact sweeping regulations against the plant. The angry crowd was in near unison against the proposals that would classify recreational and medical marijuana into one licensing system.

One central planner at the microphone proposed that home growing and collective gardening of the plant should not be allowed. Residents boo’d and hissed at the suggestion.

One woman spoke out against a proposal to limit the amount of marijuana to three ounces per person. She described how she puts it in her milk and uses it to cook so she doesn’t have to take opiates.

The central planners of the Liquor Control Board, Dept. of Revenue and Governor’s office have produced policy prescriptions that almost totally undo the progress made in 1998’s initiative 692 that legalized medical marijuana in Washington. The SeattlePi.com blog writes:

“If enacted, the WSLCB work group recommendations would roll back a medical patient’s right to home grow marijuana for medicinal purposes, further restrict the amount of pot a patient could possess, eliminate the affirmative medical defense for patients found to be in excess of the currently allotted amount of medical marijuana under I-692, and effectively render any and all current doctor’s recommendations null and void, requiting current patients to be re-evaluated (which for many will mean being rejected by a new, much more stringent, selective authorization process).”