The Senate blocked reauthorization of the Patriot Act early Saturday, and left for Memorial Day recess without a clear plan to reauthorize the bill before it expires May 31.

Senators rejected both a two-month extension of the bill the National Security Agency uses to justify its bulk collection of phone data, and a reform bill that would make phone companies responsible for keeping the data.

The House overwhelmingly passed the reform bill, the USA Freedom Act, and won’t be back in session until June 1. The Senate will return from recess and resume debate on the bill a week from Sunday, just hours before the Patriot Act expires. (RELATED: White House Will End Bulk Collection Of Phone Records If Congress Lets Patriot Act Expire)

“Do we really want this law to expire,” Majority Leader Mitch McConnell said on the Senate floor after the votes concluded around 1 a.m. Saturday morning. “We’ve got a week to discuss it. We’ll have one day to do it.”

“So we better be ready next Sunday afternoon to prevent the country from being endangered by the total expiration of the program that we’re all familiar with.”

Republican Sen. Rand Paul, who is running for president, and largely responsible for preventing the Senate from agreeing to even a 24-hour extension of the bill, lauded the delay. “I am proud to have stood up for the Bill of Rights,” he tweeted Saturday. “But our fight is not over.” (RELATED: Rand Paul Filibuster Ends After Nearly 11 Hours)

The USA Freedom Act would end the bulk collection of phone data by the NSA, and require the agency to obtain the data from individual companies on a case-by-case basis. Defense hawks worry that process would be dangerously cumbersome, and inadequate because companies are not required to keep the data.

And some critics, including Paul, say the bill does not fix the fundamental problem, which is allowing the government access to massive amounts of American’s phone data.

The NSA currently collects and stores huge amounts of metadata, which includes basic information about phone calls, such as phone numbers, and the date, time and location of a call. Only 37 people are able to run a given phone number against the data if the NSA and Department of Justice approve the request, and if a special foreign intelligence court determines they have “a reasonably articulated suspicion.”

A federal appeals court recently ruled the metadata collection program is illegal under the Patriot Act. 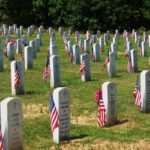 How Should Libertarians Celebrate Memorial Day?